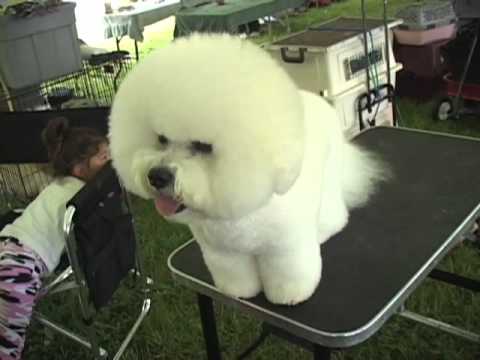 The Bichon Frise has been dated as far as the 13th century as a direct descendant of the Poodle and Barbet Water Spaniel. These dogs were traded extensively worldwide by the Spanish sailors eventually becoming a favorite in the French Royal courts in the 16th century.

Seen as a small sturdy looking dog approximately 6-12 kg in weight. The skull of the Bichon Frise is slightly round with a bluntly shaped muzzle. The tail is viewed as generally groomed in a long, curly appearance and positioned over it’s back.

Characteristically known for its black nose and round dark eyes and curly dense coat similarly to that of a poodle these dogs are generally cheerful and playful in their temperament. They have the tendency to be very well mannered sociable dogs who love human company and demanding of attention. They are intelligent, affectionate and charming and have been known to do exceedingly well in the company of small children and other animals.

Making the decision to breed the Bichon Frise dog is costly venture as the dogs require a rather an expensive cesarean sections allowing the dogs to give birth. They are also known to have general high maintenance health treatment costs relative to their skin, ears eyes and knees.

A lot of care needs to be placed on daily exercise for these dogs as they have been known to display unusual behavior patterns when not walked on a regular basis as they enjoy sufficient romp space such as those included in your local neighborhood park or backyard of your home.

It is imperative that owners do not allow the Bichon Frise to develop what is generally termed as “The Small Dog Syndrome.” This is an undesirable trait which if not careful can easily be developed in the Bichon Frise if the dog is led to believe he is a pack leader to humans. The resulting effect of this syndrome is the dog barking, and snapping extensively which are uncharacteristic traits of the Bichon. Rather one should exert and maintain an assertive yet calm attitude towards the dog during daily walks.

These dogs should be groomed every three to four weeks by a professional by trimming around the eyes and ears extensively cleaning the eyes especially to prevent staining. The dogs have been known to shed little or no hair making them perfect pets should a person have severe allergies.

It is important to note that the Bichon Frise are not dogs to be left in an outside kennel regardless of how comfortable the kennel is constructed. These dogs are of a social breed and will require you to keep them within the confinements of the home.

The cost of stud fees can cost as much as over $300 for a papered dog whilst keeping the female on a healthy diet enriched with premium food as well as enduring the puppies each receive their first shots can burn a severe hold in your pocket if you’ve not made preparations.

A Bichon Frise will generally go into heat every six weeks or thereabout and can be visible by a noticeable clear discharge followed by some bleeding. It is highly recommended that you do not breed during the first two weeks of her going into heat but rather wait until 10 to 14 days following the bleeding keeping the male away until this time period has passed.

Breeders have been known to carefully observe the breeding process as the female at times have been known to become injured by the male forcing the breeders to take hold of her upper body during the mating act. Separation of the dogs must not be done until the entire process is complete which on occasion can last between 30 – 45 minutes.  After mating the dogs will eventually separate from each other and go their separate ways.

The climatic conditions for breeding Bichon Frise puppies must be warm. Ensure you have a comfortable location for the mother to successfully give birth to her puppies. Consult with your local veterinarian should you require a cesarean section in the event of an emergency as well as providing the respective shots for the puppies. A Bichon Frise female will birth as many as three to twelve puppies at times giving birth to one or more puppies which will be stillborn.