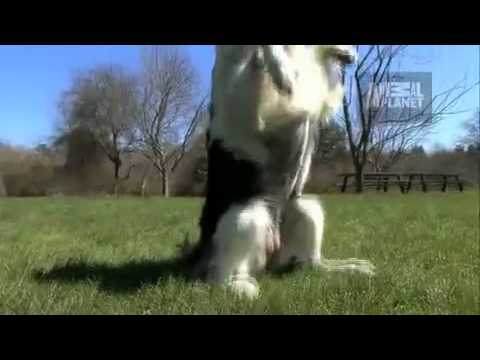 Standing a a height of between 19 to 22 inches and having a weight of no more than 35 to 45 pounds the Border Collie was initially developed as a sheep herder in the hilly border regions between Scotland and England.

This breed was characteristically found to have an intense stare which allowed it to effectively control it’s flock. A dog of seemingly unlimited energy and drive has allowed this breed to remain to this day a primer herding dog used by farmers and ranchers.

The Border Collie is hardworking energetic and smart and is such a quick learner that there are few challenges that will leave this breed challenged. Not your average lay on the porch dog the Border Collie should be kept busy or else it may become severely bored which in turn can lead to an increasingly annoying behavior. Highly responsive to hand gestures and sudden movement this breed can become strong minded and independent and can be found chasing after children, other pets or even cars due to it’s nature of chasing sheep. This breed should be exposed to a variety of people, places and objects to allow this dog to develop a sort of social confidence to overcome it’s otherwise shy nature.

A highly adaptable dog suited best to any environment which allows suitable room such as found in a large home with adequate yard space or preferably a farm or country ranch ensuring he is not allowed to explore the option of chasing cars.

Owners of this breed are highly advised to provide the Border Collie with sufficient mental and physical exercise activities for their natural limitless energy.

It is recommended that the Border Collie should be fed at the most twice per day with no more than two cups of nutrition rich dry foods. Whilst this amount has been suggested, it has been observed by a variety of owners that the adult Border Collie daily diet will vary in respect to its metabolism, the size and activity level. The quality of food provided will also play a vital role in the appetite of this dog as more nutritional foods will result in lower feeding times.

The Border Collie breed has been generally seen to have two distinctive coats rough and smooth. Both these coats are doubled in their appearance with a rough coarse outer coat medium in length feathering towards the legs chest and stomach and a smooth softer undercoat shorter in nature with a coarse texture and minimal feathering. This coat can often be observed as black with a slight blaze of white on the neck, legs, face and tip of it’s tail.

Teeth should be brushed at least twice per week to remove bacteria and tar tar in addition to gum cease and bad breath.

The nails should be brushed at least one a month and the ears wiped on a weekly basis to prevent any incident of infection.

It can be said without a doubt that the Border Collie is an outstanding family dog provided the breed is properly raised and trained from a young age. The dog has been observed to get along extremely well with children as well as other pets in spite of the occasional instinctive tendency to chase, nip and bark.

When breeding the Border Collie special consideration must be observed that this breed will have her first heat cycle at the age of 6 months. This cycle will generally last for a period of no longer than 7 months. During this cycle it is most likely that this breed will become pregnant and conceive puppies. The border collie will display swelling of the vulva, a slightly red discharge coming from the vaginal opening, display a temperament of being over clingy to the owner and become flirtatious with males by lifting her tail and wagging it in a waving motion while bumping the hind legs of the male.

Many breeders suggest breeding the Border Collie when she is physically fully developed which on average is around the age of 2 years. This allows the development of the breed’s bone structure around the pelvis and hips to develop to allow her to successfully deliver her litter. The breed prior to mating should have a sound mind and body and of good character. This will determine the temperament of the litter.

Both dogs should be thoroughly tested for any hereditary diseases which may be padded down to the puppies. Once they have received a clean bill of health then they should be placed in a quiet environment for mating.