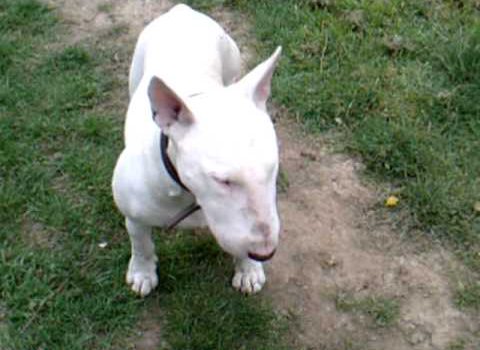 Bulldogs in the early 18th century were cross bred with terriers which made them quite popular during that era due to the combat sport of fighting Bulldogs with Bulls.

With this in mind sporting enthusiasts decided they wanted to create a breed which was able to be more agile when attacking and so the Bulldog and the Old English Terrier were cross bred while adding blood from a Spanish Pointer to give birth to the Bull Terrier Breed.

The result was a failure as the breed was nothing as expected in its fighting capability. The Bull Terrier was later bred with the brindle Staffordshires to develop Bull Terrier having a white coat. This particular breed variation was nicknamed the White Cavalier and was seen as a fashionable breed for members of the noble household where it was employed as a guard dog, herder, ratter and even a watchdog. Later a smaller more manageable breed was developed with similar qualities.

The Bull Terrier otherwise known as the English Bull Terrier can be seen as a strong muscular breed ranging from anywhere between 35 to 75 pounds on average and standing between 21 to 22 inches above the ground. It’s body is fairly rounded supported by a short strong back. Its head has an oval shape flat at the top and gradually sloping down towards it’s black nose.

The eyes are small, dark, deep set within its skull and almond shaped. Both the ears are small thin and can be seen as in close proximity to each other. The shoulders are robust in appearance and are additionally defined by the breed’s long muscular neck contrary to it’s short low set tail. The Bull Terrier has a short dense coat quite flat in its appearance and rough to the touch which allows easy grooming. Brushing is required 3 to 4 times each week so as not to allow shedding of its coat and additional care should be observed ensuring the nails are trimmed and the ears kept clean.

This short coat makes the Bull Terrier primarily an indoor dog not suited to cold weather.

The breed is seen generally as having two distinctive colors, white with definitive color markings on its head and colored in black, black with shades of brindle, brindle, fawn and tricolored with a few white marks or just red.

Once seen as a fierce gladiator the Bull Terrier has over the years adopted a more gentle nature. Although the Bull Terrier was never bred for the purpose of a guard dog, it can prove highly effective in circumstances where it’s owner may be in need of protection in a potentially dangerous situation.

The Bull Terrier has been observed as a fearless, courageous, fun loving, highly active, polite, obedient, and loyal dog thriving on consistent leadership and affection displayed from its owner making this breed a great addition to any family household. They like to be constantly active and have been seen as great companions of families constantly involved in outdoor activities.

Such activities might include going on daily walks, playing fetch or playing with a toy. It is recommended that while walking the Bull Terrier a leash be used to prevent the dog from running off on its own.

The Bull Terrier does not like to remain alone for extended periods during the day in excess of 8 hours. As a great companion for adults and children, Bull Terriers require a vast amount of physical and mental exercise due to their highly energetic nature and children within the family of this breed should be taught to exercise firm yet affectionate leadership qualified around this dog. Many owners have found the Bull Terrier to display attitudes of over protection, possessiveness, and jealousy in quite a few instances and even may join in a family discussion once it gets to a heated level.

Early training is vital to ensure you provide leadership attributes with the Bull Terrier without the use of harsh tones as this breed is one of the more difficult to successfully train.

When breeding the Bull Terrier both dogs should be tested by your local veterinarian to endure that are both good breeding specimens free from any hereditary diseases which could be later passed down to the puppies.

Both should be of pedigree linage of the English Bull Terrier breed. Having determined those facts the dogs should be introduced to each other when the female is in heat for at least 1 week. They should be placed in a kennel where they can be allowed to mate on multiple occasions to allow the male to impregnate the female.