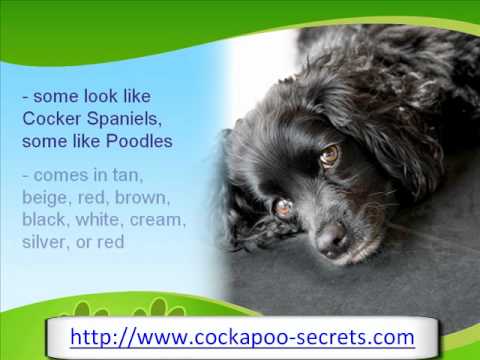 Bred in the 1960’s the Cockapoo has been referred to as an old hybrid dog extremely popular during its time. The first bred was developed purely accidental however they were observed to be highly intelligent, odorless, low shedding in their Poodle like coat and their easy going temperament.

This was a distinctive reminder to the beloved Cocker Spaniel thus giving birth to a new well received breed known as the Cockapoos.

The Toy Cockapoo similarly to the Teacup Cockapoo also stands at 10 inches but is slightly more sturdy in its build with the largest of its kind weighing just under 12 pounds. The Miniature Cockapoo about 11 to 14 inches in height has an approximate weight of about 13 to 18 pounds.

The Cockapoo is seen as highly intelligent breed and easy to please. Originally developed as a companion dog this breed has a temperament of a happy go lucky and extremely friendly dog. Known for its outgoing nature and sociable demeanor this breed will at times enjoy cuddling with their owners on the couch watching their favorite movie.

As with most breeds, the Cockapoo requires socialization skills to be instilled from an early age through exposure to various people, animals, sounds, and experiences to ensure your breed matures into a well-rounded dog.

They prefer the company of their owners and family members and have been found to exhibit traits of high anxiety when they have been ignored or left by themselves over long periods of time. Training this bred can be an easy task guided by exercising some levels of patience,  and depending on the temperament of the Cockapoos bloodline parents. They have been found to be highly responsive to positive reinforcement commands achieving substantially high levels of obedience.

Though not widespread among all the Cockapoos, some of the breeds are prone to a variety of diseases including, Cataracts, Allergies, Liver Diseases and Ear Infections to name a few and as such should be tested on a regular basis by your local veterinarian and cleared of any such conditions. In addition it is recommended that both the female Cockapoo and the Stud be tested prior to breeding to ensure there are no diseases which could be passed on to the puppies of the litter.

The Cockapoo breed has been known to exhibit a high level of energy and will require some exercise activities in the form of playing in the back yard or by going on regular walks or jogging for a minimum of fifteen minutes on a daily basis. Cockapoos are best suited for indoor living conditions and should never be left alone in an outdoor kennel.

Cockapoos have a single layer long coat which can be seen as either straight or slightly curly without any distinctive kinks. They have been found to have a variety of color schemes similar to the Cocker Spaniels and the Poodle breeds. The hair surrounding the eyes should be trimmed as necessary to allow the breed to see clearly and the coat brushed on a daily basis.

Breeding the Cockapoos like any other breed requires taking certain factors into consideration. However as this particular breed has no specific standard which makes the look, and texture of the coat entirely unpredictable. These attributes in addition to the looks and temperament of the puppies are generally determined by both the parent’s background when breeding. It is because of this unknown possibility and variation why many breeders consider the tasks of breeding these particular dogs fun.

There have been occasions when a litter of Cockapoos will have one or two of the puppies as having distinctive characteristics of the pure breed Cockapoo. This situation is referred to by breeders as a throwback. Relative to the occurrence of the genes and how they blend during the breeding process will result in the puppies having a distinctive resemblance to the Poodle breed or the Cocker breeds as regardless of the likeness are still categorized as Cockapoos.

Having a particular Poodle throwback will result in the breed having a coat texture that is slightly more curlier and a physical appearance much like the Poodle and similarly a Cocker Spaniel throwback results in gut puppies having a likeness of the Cocker Spaniel with its shorter and smoother coat which has a strong tendency like the breed to shed.

Cockapoo females will usually go into heat when they are between 6 to 7 months old occurring two times each year. They will remain in this heat cycle for a duration of of about 3 to 4 weeks though there have been instances where some females will remain in heat as long as 6 weeks.

Specific changes in the breeds appetite, restlessness, and increased frequency in urination, vulva swelling and flirty behavior towards male breeds are just some of the symptoms that can be observed to determine your female in her heat cycle.

Most breeders suggest that breeding should be done on her second heat cycle when she is more mature mentally and physically to ensure a trouble free delivery of her litter as her bones will be softer at this time and as such more flexible to allow an easier delivery.

A successful pregnancy upon mating generally lasts between 62 to 65 days on average during which she should be taken to the local veterinarian for periodic examination to ensure her delivery is incident free.

A suitable whelping area should be prepared for your female Cockapoo for her to deliver her litter preferably in a quiet secluded warm room.