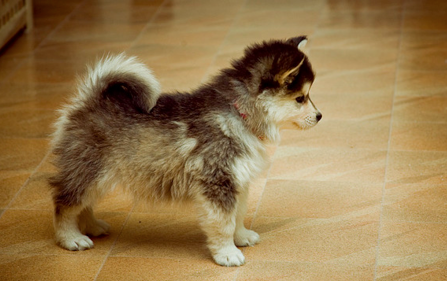 The Pomsky or Pomeranian Husky mix is considered the latest “designer dog”, succeeding such hybrid breeds as the Labradoodle, Golden Doodle, Buggs, Cockerpoo and Pomapoo. Designer or hybrid dogs are the result of two purebreds of different breeds, though the respective breeds are often similar in structure, size or function. The hybrid breed that becomes very popular is often inducted into purebred dog shows once it has become recognized as a breed of its own.

Because there is a wide range in size between the average full-blood Pomeranian and Husky, the Pomeranian Husky mix may grow to be anywhere from 5 to 20 pounds, and its markings may be more Husky, more Pomeranian, or the dog’s markings will be somewhere in between, with solid splotches like a Japanese Chin or Pekingese. The dog has the pointy ears and muzzle that are characteristic of both its parents and the Spitz type, and typically its tail will be curled over its back.

Check Out More Pictures of The Pomeranian Husky Mix At The Bottom of This Post!

Both the Pomeranian and the Siberian Husky need considerable exercise, as both are descended from centuries of breeding as sledding, working, hunting, and herding dogs. The Pomeranian was bred into a toy breed centuries ago and has increasingly been bred smaller for urban living, but even toy dogs, especially those bred from hard-working dogs, will require some exercise that can usually be taken care of by daily play and walking.

On the other hand, Huskies are still used in fields that require great stamina, and so they require significantly more exercise to the point that their behavior can become problematic if their exercise needs are not met: they should be walked and played with outside every day. The Pomeranian Husky mix will likely fall somewhere in the middle of average to Husky levels of exercise.

Because of their Arctic family history on both sides, the Pomeranian husky mix will have thick, fluffy hair because of what is known as a “double coat”, referring to an inner and outer layer of fur, amounting to twice, if not almost twice, the amount of fur that single-coated dogs would have. Especially because of the double coat, the Pomeranian, the Siberian Husky, and the Pomeranian Husky mix are all known to be shedders, but this is something that can be minimized by regular brushing at least several times a week. This will also prevent tangles and mats.

Talk to your veterinarian about the appropriate feeding regimen for your new Pomeranian Husky mix puppy. Both Pomeranians and Huskies usually require a lot of protein to sustain their health, and vegetables and whole grains are also beneficial to the active Pomeranian Husky mix. The age, health, and size of your dog will also come into play, as these factors will range over time and from dog to dog.

The Pomeranian Husky mix is the combination of two dog breeds who are usually very good with children, and as historic pack animals, both the Pomeranian and Husky sides make the Pomsky very compatible with homes full of other pets, especially other dogs.

Pictures of A Pure Breed Pomeranian

Pictures of A Pure Breed Husky

A Few Fun Videos of Pomskies


Ever wondered how did Pomeranian Husky Mix came to be?


We would love to show you some live footage of Pomskies but it’s really hard to find those online. Let us know if you’ve got one!

Is The Pomeranian Husky Mix The Right Breed For You?

If you don’t like the idea of owning a Pomeranian Husky mix read below to find out what is a pure Pomeranian dog like.