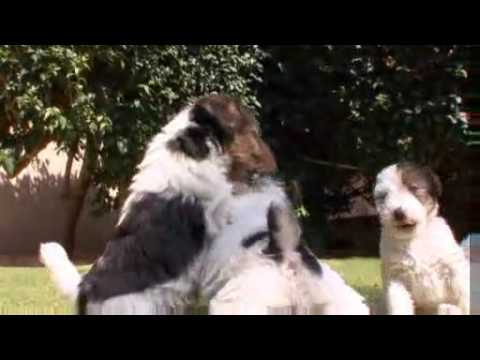 The Fox Terrier today can be seen as two particular types of breed. The Smooth Fox Terriers which are intelligent, sleek and elegant and the Wire Fox Terrier which are quite handsome and stylish when groomed with a playful temperament.

The Fox Terrier breed was developed to bolt during a fox hunt whoever the foxes would hide in their holes. The breed was used to drive the foxes out of their hiding places and towards the oncoming fox hounds and hunters. The Smooth Fox Terrier breed is seen as a direct defendant of the Fox Terrier and although not commonly seen today can be observed within the confinements of Dog Shows and hunting events.

Smooth Fox Terriers were preferentially used during Fox Hunting expeditions as while hunting they would be less likely to be mistaken for the fox being hunted. The Wire Fox Terrier however is favored for hunting in rough country areas as their durable coats made them less prone to develop any injuries during the hunting expeditions opposed to the Smooth Fox Terrier who was found to easily become injured whilst hunting in rough country. The Fox Terrier breed though today not used for their hunting skills have a natural instinct to dig and drive smaller animals as prey from underground whenever they get the opportunity.

Fox Terriers have been known to live well into their teen years as they are seen as small dogs sometimes weighing between 18 to 21 pounds on average allowing them to be taken around just about anywhere.

The Fox Terrier breed is a brave, highly energetic dog very loyal to it’s family members but can be seen as quite aggressive towards other breeds at times being the aggressor in picking fights regardless of the dog type and size. Fox Terriers who have not been trained or socialized with other pets should never be left in an unsupervised area alone with them.

This self-confident breed has a natural instinct to be an active explorer and as such should be carefully watched in any unsecured space as they will escape into any area where they can dig an escape route.

Fox Terriers with their high levels of intelligence, obedience and agility make them easily trainable as they are willing and able to learn new tricks only requiring firm commands and consistency when training. Mental and physical stimulation is greatly required when training this breed to prevent their natural instinct of digging, barking and chewing from taking over.

They are excellent watchdogs as long as they are not left alone and unsupervised for any extended period of time in the yard.

Before breeding the female Fox Terrier both the male and the female should be tested for the existence of any potential diseases that may be prevalent to the breed which could be passed on to the puppies. For many dog breeds, Hip Dysplasia has been observed most times within the first 24 months of the dog’s life and as such it is recommended that they be tested after a two year period to ensure that have not developed this condition.

The female Fox Terrier will have her first heat cycle within six months followed by her cycle occurring twice on a yearly basis and will last for a period of 18 to 21 days on average. This is observed by a mild swelling of her vulva and a bloody discharge which generally lasts for at least 9 days.

During this period the female will although seemingly attractive to the male stud will not mate with him but rather will reject any advances made. As the bloody discharge lightens in color, to an almost pink shade her vulva will become increasingly enlarged at which she will be more receptive to the male. This period typically lasts between 7 to 11 days and has been observed as the period when she is most fertile.

The Fox Terrier female a this point should be introduced to the male for breeding. Both dogs should be introduced in a quiet area and allowed to mate during this period. Within the following 14 days after the mating period the Fox Terrier will have a slightly more red discharge as the vulva swelling will have returned to its normal size and she will no longer accept any males for mating. Her heat cycle will have been observed to come to an end when all signs of swelling and discharge are non-existent.

A successful breeding will result in a normal gestation period of between 60 to 63 days from the initial time of conception which can be determined by your local veterinarian three to four weeks after the Fox Terrier mating.