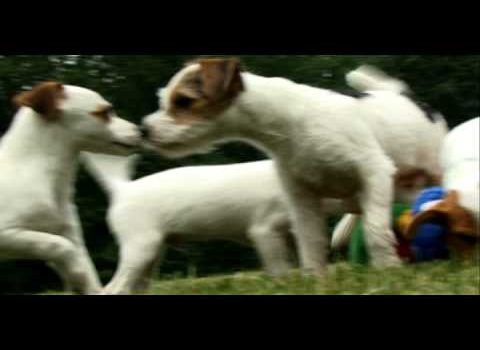 Bred in an age when men of the church enjoyed hunting activities specifically to hunt foxes in Southern England nearly 200 years ago. Developed by John Russell fondly called Jack by his peers the dog was bred as an efficient hunting dog.

Due to its quickness, agile and intelligent nature, the breed quickly became the favorite of fellow hunters. Bred with a natural desire to hunt, the Jack Russell Terrier won the hearts of sports enthusiasts, horse owners, animal trainers and just about anyone who came across this breed and was marveled with its small size, endless energy, and fearless temperament.

Today training the Jack Russell Terrier has become one of the most difficult tasks experienced as it requires a lot of patience, time and unbounded sense of humor. With a mind of its own, the Jack Russell Terrier though trainable must be introduced to a training routine designed to spark its interests as the breed will quickly become bored if not properly stimulated thus turning its attention elsewhere.

The perfect breed for owner who require a dog who will learn tricks including fetch, drop and roll or run an agility course in a dog show and yet be the home companion regardless of the mischief they will create.

With adequate time, energy and patience, the Jack Russell Terrier can be the ideal dog for any family as it enjoys being with family members and his heritage as a bred hunting dog has allowed this breed to be an excellent companion when it reaches a mature age. Families with children have found this breed to be a suitable pet displaying traits of affection and compassion although its highly energetic nature a times will prove to be more than a handful for smaller children.

When breeding the Jack Russell Terrier both the male and female breeds should be immunized. free of parasites and tested by your local veterinarian at least 30 days before mating to ensure both are free from any hereditary diseases which could be passed on to the puppies at birth.

The Jack Russell Terrier bitch like other breeds will have her first heat cycle within 6 months of birth and will occur repeatedly every 6 months thereafter or twice per year.

Specific symptoms will can be observed to determine she is having her heat cycle. These may include, swelling of her vulva, with a reddish colored discharge. Most breeds heat cycles are broken down into three specific stages.

The first stage is known as the Proestrus stage during which marks the initial stage is noticed by swelling of the vulva with a slightly reddish colored discharge and will last between 7 to 11 days. The female breed although becoming seemingly attractive to the male stud will not mate with him often responding violently to any advances.

The second stage is the Estrus stage and it is during this particular stage that the female breed will become receptive to the male breed. She may show specific signs of signaling the males by positioning her tail to one side, a term known as flagging. She may also flirt with him by romping with him humping him at times herself. This stage generally lasts between 5 to 6 days.

Successful mating will result in the stage known as the Metestrus stage in which the actual fertilization of the egg occurs. During this period the egg which has been fertilized will travel throughout the Fallopian tubes to the uterus. Although she may exhibit the pheromones to attract the males she will not mate with them.

Most breeders suggest that breeding should occur within the male’s home environment in a small quiet room.

The mating process will usually occur without any intervention after the breeds are introduced. The stud will become overly exited in the presence of the receptive female and begin to lick her vulva region. He will quickly mount her from behind penetrating her. The glands behind the penis at this point will begin to swell. In response the female’s vulva will clamp around the swelling forming what is known as a tie. The tie will last between 30 to 45 minutes during which the sperms are sent to the waiting eggs to be fertilized.

A successful breeding of the female Pug will result in a pregnancy which lasts between 60 to 65 days on average. During this time she should have her regular visits by the local veterinarian to closely monitor the pregnancy to allow a smooth delivery of her litter.