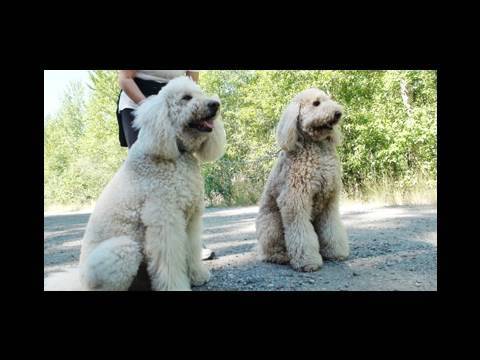 The Labradoodle breed was originally developed in Australia. The breed was created specifically to be used as a hypoallergenic guide dog by Wally Conron in 1989 who at that time was in charge of a breeding program for the Royal Guide Dogs Association within Australia aimed in producing a suitable and efficient guide dog by cross breeding the Standard Poodle and the labrador Retriever.

Conron’s first successful breed produced was the Sultan. Not only did did the breed have the hypoallergenic coat but the dog was bred as having the aptitude, intelligence and personality required to be a good guide dog. As a result the cross breeding of these specific breeds of dogs became recognized by other breeders as having merit.

Similar to the Labrador Retriever adult, the Labradoodle breed quickly became popular as one of the most sight out breeds. They are specifically produced by crossing the Labrador Retriever with the Poodle. Over time this has led to multigenerational breeding of various dogs in the attempts to develop a more recognizable and viable breed.

The Labradoodle breed are seen in three distinctive variations in size. These breeds are seen as either Standard, medium or Miniature. Their varying sizes is a direct result of the size of the Poodle used in the first generation breeding process.

Respectively the Standard Labradoodle is as standing about 21 to 24 inches above the ground and having an overall weight of about 50 to 65 pounds. The Medium breed is between 17 to 20 inches in its height and will weigh anywhere between 0 to 45 pounds. The Miniature Labradoodle maintains an average height of 14 to 16 inches with a weight of no more than 25 pounds.

A highly intelligent dog, The Labradoodle breed is seen as an excellent pet and worthy addition to any family once properly trained. Loyal energetic and alert this breed is a wonderful companion to every member within the family and will express her devotion and happiness by exuberantly jumping up and down while playing. The Labradoodle was bred to be free from aggressive tendencies and can be observed as quite easy going and carefree. However as with any cross breeds,  the Labradoodle can exhibit an unfriendly temperament which might be hereditary from being poorly bred with an unfriendly adult.

Labradoodle puppies are generally inherent to the training and socialization of either the Stud or bitch used when breeding and it is generally recommended that breeders access the temperaments of the dogs before breeding to ensure the required characteristics of the puppies. Overall Labradoodle puppies are curious, playful and easily approachable to be held by people. When choosing your Labradoodle puppy many breeders suggest choosing the dog that stands in the middle of a room which is a strong indication of natural socialization skills.

As in the case of all breeds of dogs, the Labradoodle is now without its share of health issues. Although seen as an overall healthy breed, the Labradoodle can become subject to a list of prone diseases including, Ear Infections, Hip Dysplasia, Epilepsy, Allergies Hypothyroidism and a few others.

The Labradoodle breed is will adapt to just about any environment however they are generally not recommended for apartment dwellers as their highly active nature requires them to have at least 45 to 60 minutes of exercise daily which is best suited for a home environment with an existing back yard and surrounding fence.

A worthy jogging partner, the Labradoodle will require some off leash time to run around to burn off those calories as they have a strong tendency to be highly destructive if not allowed the opportunity to run around.

Training the Labradoodle breed is an easy task obtainable by exercising a lot of patience, consistency and positive attitude reinforcing your commands with rewards of love and appreciation.

The Labradoodle is seen to have a one layered coat with either straight or loose curls. Grooming the Labradoodle breed differs with respect to their  varying coats it is generally suggested that the existing coat be maintained at a length of no more than 4 to 6 inches keeping the curls loose, and never allowed to be thick or fluffy.  These breeds are considered to be non-shedders due to their minimal shedding of the coat and as such will not require any additional or excessive grooming. Brushing should be done at least once to twice on a weekly basis and clipped every six to eight weeks.

The Labradoodle female will experience her first cycle of heat within six to seven months lasting 22 to 28 days. Most breeders will recommend that breeding occurs during her second heat cycle to ensure she is physically fit to handle the pregnancy and delivery of her litter. During this cycle she will exhibit specific symptoms of  bloody discharge from her vaginal area as a strong indication she is ready to mate.

During second week of her heat cycle she should be introduced to the male for breeding provided both have been thoroughly tested by the local veterinarian for any hereditary diseases which may be paddies on to the puppies.

A successful pregnancy will last up to 63 weeks during which your female Labradoodle should be provided with a warm whelping area to deliver her puppies and regular trips to the local veterinarian to ensure a healthy delivery for her litter.