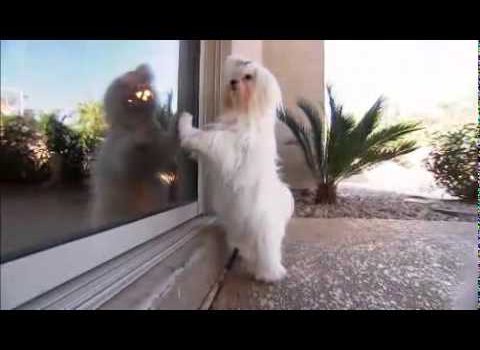 The Maltese dog is a playful, lively gentle faithful and trusting breed. Small and sturdy sporting a silky coat this breed is slightly longer than it’s tail. A deep chest with a slightly rounded skull the breed’s medium muzzle tapers to it’s black nose and open nostrils. It’s hanging low-set ears are seen as short and heavily feathered.

Having a silky one layered coat having either an ivory or white color this breed is generally kept well groomed to that of a show dog having it’s coat long and hanging almost to the ground, however there are many owners who have become in the habit of cutting the coat short puppy dog cut for easier maintenance.

Maltese are very intelligent dogs quick at learning new tricks and alert to suspicious noises and alert in situations. A graceful companion and suitable family member, this breed has been known to get along well with other animals and larger dogs. They have a love for outdoor exercises and as a result are quite difficult in house training.

When breeding your Maltese female you should be sure to have a Brucellosis test done every three years to ensure you do not make the male infertile. Although this disease is uncommon, if your Maltese has been found a carrier the result would be the Maltese male impotent.

Most veterinarians will suggest you should have a Vaginal cytology test done to obtain an accurate report clearing your Maltese ready for breeding as well as having all the required shots and registrations done.

The Female Maltese dog should not be bred until they have passed the age of 2 years and have gone through at least 2 full heat cycles. Males on the other hand are ready for breeding up to six months regardless of the season.

Male Maltese breeding fees are usually half of the price on the successful sale of one of the puppies generally stipulated by a written and agreed contract between both the parties prior to the female going into heat.

The fees are non refundable payable at the same time during the breeding regardless of whether the female Maltese becomes pregnant.

Within a period of just under two months the nipples of your Maltese female will begin to grow with a slight swelling in the stomach region over the duration of the remaining three weeks. Your Maltese female will experience a slight weight gain of around 4-5 pounds and some movement can be felt as you place your hand gently on her tummy.

The maltese female will begin to create a nesting area in preparation for her puppies during the last trimester as the gestation period can last up to 65 days. it is recommended that you have your local veterinarian examine her at least 45 days into the pregnancy and have an s-ray done to determine if there are any complications.

Your Maltese female will most likely deliver her puppies during the middle of the night. Should you notice a green/brown stringy mucus from her vagina; this is a clear indication that her water has been broken as you should immediately take her to your local vet as the puppies will be in danger.

Crying during the delivery process and pushing in excess of 3 hours unsuccessfully is a strong indication that your Maltese will be in need of a cesarean section to complete the delivery of her puppies. Should this be the case and she is in ned of such a surgical procedure preparations must be made to place the puppies on the nipples of the female as soon as possible after delivery.

Normally your vet will suggest you take the female and had puppies in the following day for a regular checkup to ensure all is progressing well with her and her pups.

The Maltese female will lick her puppies stimulating them to go potty, many owners have suggested that using their fingers with the aid of baby oil to arouse the genital area of the puppies to potty has proven successful as it is imperative that young puppies will undoubtably die upon failure to potty. The constant crying of a puppy is a clear indication that they need to go.

Maltese puppies are birthed in tiny sacks which will require them to be cut with a small scissors, an ear nose syringe to remove any excess liquids from the airways,  typically used for young babies and a bottle of alcohol and dental floss.

The umbilical cord is tied with the dental floss at about half of an inch away from the puppy and cleaned with the alcohol. The cord is then cut above the know and left to dry ensuring the length is short enough to prevent the mother from tugging at it hurting the puppy.

Having given birth to a litter of puppies your Maltese female will require a special diet to maintain healthy nursing for her puppies. She will require more food as many owners have reports that the use of canned food supplements have been adequate in sustaining the Maltese female during this period.

Care for the living environments of the puppies can be achieved by using a warm water bottle wrapped within a bath towel placing it in the the nest along with the puppies to keep them warm.The bedding should be constantly changed to keep it free from bacteria thus preventing infections. Never place the young puppies in a playpen. Rather place them in a basket as the basket will less likely have the tendency to retain bacterial content which can result in diseases.

Do not allow her puppies to be handled by visiting friends or family members until they are 6 weeks old and over as well as ensuring visitors remove shoes before entering the room where the puppies are kept as it has been reported that parvo is one such disease which has been known to have been transmitted through shoe contact.

The Maltese puppies should be weaned between 4 to six weeks after birth as you should try and obtain some weaning milk from your local pet store and place it in a saucer pan introducing it to the puppies to allowed a smooth transition from the female’s milk. After a period of 8 to 10 weeks Maltese puppies should have developed teeth are old enough to chew dry foods, however such food should never be left in their sleeping area as they should potentially choke on it.

When you have successfully weaned your puppies most owners suggest feeding them Shark’s Liver Oil at least two times per week until they are 12-14 weeks of age reducing that dosage to once per week.