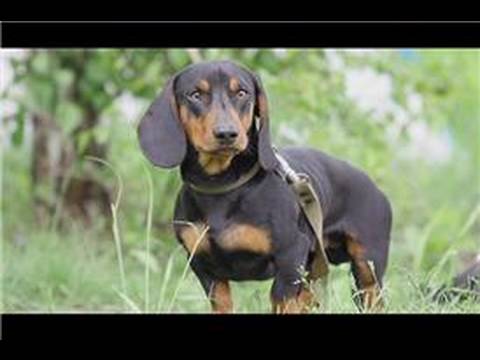 The Original Dachshund breed was found during the 16th century. The name of this particular breed was recognized from two specific German words, dachs which means badger and hund which when translated means dog. In effect the Dachshund translated would mean badger dog.

During this era they were used for the sole purpose of catching badgers and small animals. On occasion a litter of pups would contain a Miniature Dachshund runt which was characteristically small in size and referred to as Miniature Dachshund. However it was not until the 1900s Dachshunds were cross bred with smaller Terriers and Pinschers to give birth to the new breed of Miniature Dachshunds. It was observed that this miniature breed when developed, contained a different coat depending on the species crossed.

Standing quite short in appearance and low to the ground, the Miniature Dachshund has a long short body robust and muscular in tone with short legs. This breed is not only balanced and alert but can also be observed as confident, intelligent, and bold bearing true to its development to hunt small game animals both above and below the ground surface. With a keen and sensitive sense of smell, this particular breed has the added advantage over most other breeds in the areas of trailing.

Their high spirited temperament is a direct result of their natural instinct to hunt. Highly intelligent they are bred to be decisive and independent in their thinking. Each variety of the Miniature Dachshund tends to have a mind of their own with a slight but noticeable difference in attitudes resulting from the ancestral cross breeds used to develop their specific coats.

They are however seen as great family dogs with young children and will require quite a bit of patience and a certain of maturity when handling them. Extremely loyal, devoted and protective, the Miniature Dachshund will bark loudly despite his size when it senses the presence of a stranger and yet will readily accept that stranger by carefully observing the attitude of its family towards that person if they are friendly.

The Miniature Dachshund breeds are suitable for both the urban dwelling family in a small or fairly apartment, or the outdoor family living in a rural area with a large home and extensive backyard. As they are very active and high spirited the Miniature Dachshund requires some exercise which can be done in the form of a walk around the block or playing fetch and romping in the backyard.

Breeds having a wire coat will require brushing at least 3 to 4 times weekly to prevent knotting.

The Miniature Dachshunds are prone to a variety of illnesses including, Intervertebral Disease resulting from lack of exercise allowing the dog to become obese. Generally seen in Miniature Dachshunds of ages 3 to 6 years and can include complications such as loss of bladed control from immobility.

When breeding the Miniature Dachshund there are certain factors which need to be taken into consideration. The Miniature Dachshund bitch will generally go into heat after the first 6 months and two times per year after that. There are some instances when she may begin her first heat cycle within four months or may take as long as twelve months.

Regardless of her timing owners should pay close attention. It is generally recommended that owners not breed their Miniature Dachshund during her first heat cycle but rather during her second. Considering the size of this miniature breed if they are bred on their second cycle their bones will be softer and more flexible to allow them to adjust variably to endure less complications during delivery.

During her heat cycle the Miniature Dachshund becomes breed able between the first two to three weeks. Owners will notice she will begin to clean herself a lot more frequently which is generally a strong indication that she is about to start bleeding. At this time she should be introduced to the stud dog and allowed to mate.

As with most breeds, the Miniature Dachshund pregnancy will last between 62 to 65 days on average.