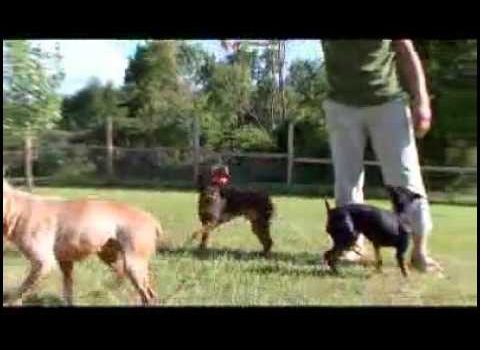 The dog was used in the control and elimination of rodents within stables as it was known as a barnyard ratter. Today this breed has been affectionately called the “King Of The Toys” and seen as a highly talented and competitive watchdog.

The Miniature Pinscher has the look of a handsome squarely built, small compact dog. Its head proportionately sized in relation to its body. A seemingly flat skull tapers to its strong muzzle with the teeth meeting in a scissor bite. They have been observed to have dark oval shaped eyes.

Its ears are generally cropped and high set. The Miniature Pinscher’s legs are quite straight as its feet are small and slightly similar to those of a cat rather than a dog. The tails have generally been cropped in the United States. However in several European countries cropping is considered illegal and as such the Miniature Pinscher can be seen as having its tail. Its smooth short coat has a slightly rough texture and can be seen as laying close to its body and have been seen in colors including black with definitive rust markings, tan with chocolate, and a shade of stag red.

Its short haired coat is quite easily groomed with a firm bristle brush and comb. Brushing should be done 3 to 4 times each week to keep the coat looking sleek and shiny. The Miniature Pinscher is a natural shedder with an easily dried skin and as such Shampooing should only be done when required in order to remove loose hair and using a warm damp towel to wipe its coat.

Due to its small size, lack of body fat and fur, the Miniature Pinscher is best suited to warm climates and will require a jacket or sweater to cover its chest and stomach in cold weather.

The teeth should be brushed three to four times each week to remove bacteria and tartar deposits and reducing the possibility of developing gum disease and bad breath.

The ears should be examined twice per week for signs of redness or bad odor which could be an indication of an ear infection. A damp cotton ball soaked in a pH balanced ear cleaner should be used to complete this task ensuring nothing is placed within the inner ear but rather ensuring the outer ear is kept clean.

Trimming the nails once a month is adequate to prevent tears and other associated problems. For the less experienced owner it is generally suggested that your Miniature Pinscher be taken to a professional groomer to have this done.

The Miniature Pinscher breed can be seen as courageous, proud, loyal to his owner, intelligent, obedient, and highly energetic. Excellent among other pets and children provided proper leadership skills are established. It is recommended that owners display strong leadership qualities to the Miniature Pinscher as they can be come quite headstrong developing an aggressive attitude towards other dogs and strangers.

Owners of the female Miniature Pinscher must ensure she is at least two and a half years old before her first pregnancy. Both your female Miniature Pinscher and the stud should be in good health before breeding as the dogs should be taken to the local veterinarians to be checked for hereditary diseases before mating. She should be in excellent physical shape and fit for breeding, and the male should be observed to have the required temperament desired in the puppies.

Breeding should take place within six to 7 months after her first heat cycle and 12 days after you notice her first colored discharge. They should be introduced for a couple of times prior to the breeding time to allow them to become familiar with each other to make the breeding easier.

The Miniature Pinscher will show specific signs of being pregnant including, loss of appetite, enlarging of the milk glands, and changes in behavior. She should however be taken to the local vet to determine if she is in fact pregnant of suffering from a uterine infection as the signs are quite similar.

Once you have determined she is pregnant you should set up a quiet warm area preferably in a closet for her to remain until she is ready to deliver.

A successful pregnancy will last up to 63 days after which the Miniature Pinscher will deliver her puppies. You should also inform her vet of the estimated delivery date just in case any complications should arise during the delivery process.