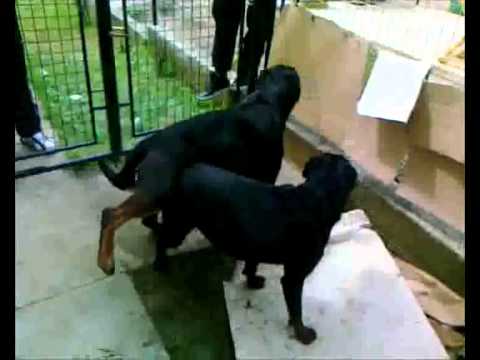 One of the more recognizable breeds with it’s massive head, muscled solid body and distinctive tan and black markings. The Rottweiler is an intelligent loyal and incredibly strong breed greatly admired by two specific group of people. The large gentle dog lovers and those who desire the fierce large attack dogs.

There have been many stories of these massive killers in the hands of inexperienced dog owners which have served only as a deterrent to many prospective owners who would have considered owning this breed. Regardless; there are many reputable breeders who have taken up the responsibility regardless of the horrifying rumors to restore the reputation of this protective breed.

On average, a Rottweiler can easily weigh up to 135 pounds due to it’s massive size and muscular tone. They have been bred for generations specifically for their instincts and protective judgement to defend their owners and family in the presence of danger, which has led to their services by law enforcement officials.

These breeds have generally been the target of lawsuits aimed at controlling or in some instances banning these potentially dangerous dogs as many insurance companies have taken the option to refuse home ownership to potential clients who own this breed.

Although this breed has been found on many occasions to exhibit a ferocious trait, there have been many instances where one may possibly find a gentle fun loving, family friendly Rottweiler. Such gentleness can be attributed to the specific background of the breed which would as a result determine its calm quiet and easy going attitude.

Training at an early age is an important attribute required to implement and develop specific socialization skills around children, pets and strangers allowing these dogs to exist as well rounded members of your family and even displaying proper manners when in public. Such actions of love and fairness exhibited to this breed in a firm tone will result in the love, respect and loyalty of your Rottweiler.

A Rottweiler who is gentle, well behaved and loving can still be a risk factor to any child, young adult or elderly person who is unsteady in their footing due to it’s massive size will potentially knock such a person off their feet potentially causing serious injury. This breed has been hereditary known as a cattle herder through it’s ability to move herds in a particular direction using it’s massive body and huge muscles.

Rottweilers on occasion need to be exposed to an exercise routine of at least 10 to 20 minutes on a daily basis, in addition they require mental stimulation through playing with toys and puzzles to keep their mind and bodies in ultimate shape as this breed has the tendency to put on weight quite easily if they are not exposed to any exercise activity.

When breeding your Rottweiler both dogs should be standing on a non slip surface. In the event that the female is larger then the male then he should be placed on a stair raiser to allow him to be at the required height.

A muzzle should be used on the female should it be her first time as a breeder as she may snap at you out of fear and possible discomfort during the process. One person should hold the head of the female steady while the male mounts her as she may slip out from beneath the male as can often occur when the breeds are overly aggressive for the first time.

The male may also need some assistance in holding him in the right position and you will probably need to hold the back of the female steady guiding him to the point of penetration. Once the male has successfully penetrated the female, her vaginal muscles will contract which will result in completing the tie.

This process generally takes anywhere between 15 to 45 minutes. The male after a time will eventually stop thrusting. At this point you should turn him around so both dogs are facing in the opposite direction.This process is done to ease the weight from the female’s back during breeding. When the male has completed ejaculating, his penile swelling will decrease as her vaginal walls will retract allowing him to slip out quite easily. The female should at this point be placed in a separate room to recover.

Rottweiler females should not be bred before the age of 2 years and breeding should be implemented during the period of heat which occurs at least twice per year.

If the breeding process is successful you will notice a swelling in the vaginal area which will be followed a month later by the nipples becoming more predominant as they been to grow slightly and protrude from her belly.

She may exhibit symptoms similar to morning sickness during human pregnancy within the third to fourth week in pregnancy including a loss in appetite and aversion to specific kinds of foods. Late pregnancy will noticed by a colorless, odorless vaginal discharge after the first week after breeding and the pregnancy will last on average approximately 58 to 68 days before she is ready to deliver her litter.

Rottweilers are excellent police dogs, therapy companions, service dogs, herding dogs and can be excellent obedience competitors. They have a strong capacity to complete any required task and with the proper social training from an early age will prove to be a powerful companion and all rounded indoor friend.