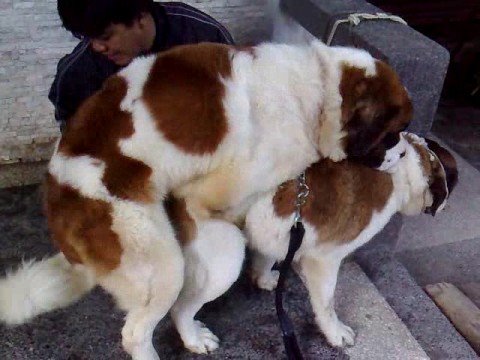 The Saint Bernard breed has it’s origin from Switzerland similar to the Bernese Mountain Dog among a few others.

It has been theorized that they were created at a time when breeds native to the Alps regions were cross bred with Mastiff type dogs from the Roman army during the reign of the Roman Emperor Augustus. The first Millennium CE gave birth to the formation of the specific grouping of breeds within Switzerland and the Alps. These dogs were known as Talhund which when translated meant Valley Dog or Bauernhund which means Farm Dog.

The Saint Bernard Pass historically is a renown alpine pass 8,000 feet above seal level with a treacherous history of being impassible except during the months of July and September.

The breeds were originally used by hospice monks as guard dogs used in guarding their grounds. Monks when they went in search of lost travelers would take the dogs along with them for added protection and through this serious of continuous events it was discovered that the dogs were much more than just protective measures but rather were excellent at locating respective paths to finding these lost travelers.

Due to the isolated location of the monks monastery and the exceptionally harsh climate allowed the breed to develop the ability to withstand harsh winter climates and physical attributes necessary for search and rescue missions.

This stock breed used by the Hospice monks was occasionally re-bred using existing dogs within the lower valley regions. In 1830 they were cross bred with the thick coated Newfoundland breeds with the aim of creating a new breed with a thicker coat. These attempts resulted in a failure as the breeds developed were found to have excessively longer hair which only allowed ice to be built up in their coats. Eventually the Saint Bernard breed was conceived and according to records of the Hospice monks they were responsible for saving over 2,000 lost travelers. Still without a formal name they were simply referred to as Barryhunden.

They were referred to by the English as Sacred Dogs and were imported with the intentions reinvigorating their own Mastiff breeds. It was not until the year 1833 that they were given the name Saint Bernard by a man Daniel Wilson.

As the Saint Bernard breed became more recognized in other countries their general appearance became to take on new features as they became thinner in size and taller as a direct result of cross breeding with other dogs.

The Saint Barnards of today cane seen as family or show dogs as they are no longer used to seek out lost travelers. There are however seen in Switzerland serving as historic representatives of hospice generations.

The Saint Bernard breed of today stands at just over 30 inches in height and has an approximate weight of 120 to 180 pounds on average. A friendly and welcoming breed the Saint Bernard are kind, benevolent, steady and caring which makes then the perfect companion for small children within the household.

They are fond when they are given attention they are affectionate in their temperament however will not become jealous and insecure if it is not received in excess as they have been found to be less demanding as other breeds.

Training and socialization should be done at an early stage while they are still manageable as with the nature of the dog to be stubborn at times coupled with its size could prove to be a difficult task for any owner.

The Saint Bernard requires a moderate amount of exercise which is essential in their daily routine to ensure they do not become obese. Due to their massive size they can become prone to a variety of issues including, arthritis or other orthopedic illnesses. Most breeders suggest limiting the breed in exercise activities until they have attained a mature size capable of handling their body weight. They on occasion they are prone to heat stroke and exhaustion and should never be allowed to exercise during the day when it is excessively hot.

Saint Bernards have been seen as having two types of coats, long haired and short-haired. The long haired coat can be seen as long and wavy in shape and the short-haired coat shorter in length smooth and sense and both can be seen with a distinctive bushy tail. The breed has been seen to appear in various shared of red with specific white markings.

When considering breeding your Saint Bernard it should be observed that the typical Saint Bernard will have her first heat cycle within the first six months after birth and will occur twice on a yearly basis. There are however some documented instances where the Saint Bernard female will have her heat cycle only once per year. It has been observed that small breeds have the tendency to cycle more frequently than larger breed dogs with some instances of cycling three to four times in heat per year. Larger breeds such as the Saint Bernard have been known to cycle between 12 to 18 months on average and are quite common.

Her heat cycle will last for a period of two to three weeks on average and will be characteristically observed by first signs of swelling of the vulvar along with vaginal bleeding. Most female breeds will become seemingly attractive to male breeds at the beginning of her heat cycle however she may not become receptive and will most certainly refuse from mating until the 7th to 10th day of her cycle. During this time both the color and odor of her vaginal discharge will change to a more watery slightly tainted discharge which is an indication she is ready for mating. In addition she will begin to urinate more frequently releasing pheromones contained within her urine to attract the male stud.

When deciding to breed your Saint Bernard, it is essential that both breeds are tested by the local veterinarian to ensure they are free from any diseases which could be handed down to the puppies in the litter.

During the mating process a section of the studs penis will begin to swell and enlarged when inside the female. At this point her vaginal muscles will contract thus preventing the male from withdrawing from her. This process has been referred to by breeders as the tie. The tie can last anywhere from between 30 to 45 minutes during which the sperms are released by the male stud making their way to the female eggs waiting to be fertilized.

A successful mating will yield a pregnancy of the female Saint Bernard which can last between 58 to 63 days. During this time she should be inspected periodically by your local veterinarian to ensure a smooth pregnancy and eventually a delivery of her litter.