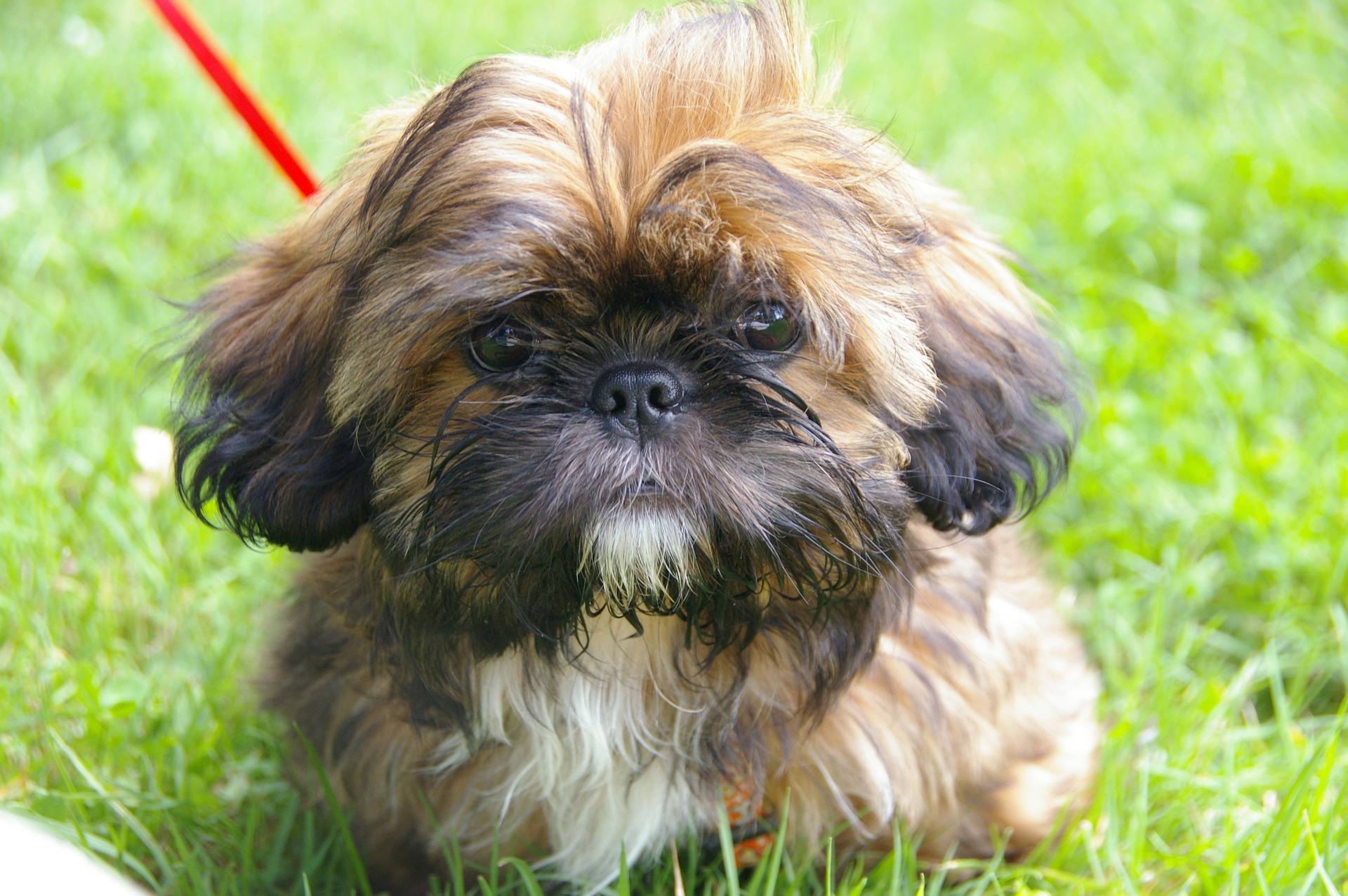 The Shih Tzu dog is seen as a breed having a short and snugly build with a solid and sturdy frame. Standing at just over a height of about 8 to 10 inches and having a weight of no more than 9 to 16 pounds, the body length of the Shih Tzu is a proportionally perfect miniature breed of a dog.

The Shih Tzu dog is observed as effortless in it’s motions making smooth strides and proudly holding it’s head and tail high, as a tribute to it’s royal bloodline.

The Shih Tzu has a full double layered dense and lush coat extending past it’s feet in length. As the Shih Tzu dog characteristically does not shed a lot of hair it can be the perfect choice as a pet for people who may have an allergic reaction to furry animals, or for those who just do not like the responsibility to be cleaning up a lot of animal hair.

The Shih Tzu needs to be groomed on a regular basis as it’s long coat if left untreated will have the tendency to become extremely entangled and matted making it quite unattractive which is one of the many reasons why this particular dog has been classified as an indoor pet rather than an outdoor dog.

The ears and the tail of this dog breed are quite long and full in shape as it’s tail can be seen protruding in a fluffing manner curving over it’s back.

As a cousin of the Pekingese dog, the Shih Tzu has a characteristically flat nose and extremely short muzzle. The eyes are noticeably wide and round allowing this dog to have a warm, loving  expressive look showing a sense of it’s trustworthiness and friendliness as opposed to it’s cousin the Pekingese who has the tendency to display a more ferocious attitude.

Bred as a domestic and family companion, the ShinTzu should be treated with care, patience, buoyancy and trust. They have been found to be highly affectionate with owners and family members especially small children when introduced.

Failure to treat this dog with love and compassion can result in the Shih Tzu having an skittish and highly stubborn behavior.

Not only is the Shih Tzu a lively playful delightful companion, but this dog is also very a mild mannered lapdog who loves to play and romp to the delight of family and friends with it’s cheerful attitude and demeanor; relaxing at the end of the day in peace and serenity.

The Shih Tzu dog needs a lot of exercise. Not just your daily walks in the park or around the block, but these breeds need to be exposed to energetic outdoor exercises such as playing fetch, as well as an involvement in your hiking or biking activities and by having the dog running alongside you while you jog.

The Shih Tzu dog because of it’s short muzzle has a high tolerance to extreme temperatures. The tendency for water to get in the nose of this dog is a factor that need to be taken into consideration when caring for these breeds as many owners have had to implement the use of water bottles for drinking purposes; a solution that has been proven successful when breeding small caged animals.

The Shih Tzu’s lush coat requires the breed to be brushed up to 3 to 4 times a week and in case where the coat is longer as in the case of show dogs; then the coat should be maintained by brushing everyday.

Most owners who do not have their dogs for show purposes but rather as family companions have been known to keep the coat of the Shih Tzu short in a type of teddybear cut making it more manageable rather than committing themselves to a rigorous grooming schedule.

Shih Tzu’s are best breed during the female dog’s second heat cycle; before but not after the age of 7 years to minimize heath issues. Having puppies over the age of 7 years of a Shih Tzu female can pose a severe health risk including the possibility of developing ovarian and mammary cancer. The females as a precaution should be spayed once the dog has passed seven years to stop the heat cycle whereby reducing the health risks.

It is recommended that Shih Tzu females not have more than three litters as giving birth puts a tremendous strain on the body of the female each time the gives birth. Some professional breeders have been able to successfully achieved more than 3 litters from their Shih Tzu’s however this practice is not suggested.

Both dogs must be severely tested to ensure there are no hereditary diseases that can be passed down to the puppies.

Getting both dogs to successfully mate requires knowing the correct timing of the female as most males with mate regardless of the season. The female SHih Tzu should be introduced to the male for mating at least 2 weeks after she has shown her first signs of being in heat.

The Shih Tzu female will move her tail to the side as a sign she is more relaxed and due to the fact that she does not try and avoid the company of the mail when both are placed in a room together is a sure indication that she is ready for mating.

Most Shih Tzu dogs have an average lifespan of between 11 to 16 years during which they can become subject to various diseases uncommon to the breed including the abnormal grown of body tissue known as dysplasia, inguinal groin hernia, cataract as well as dental problems.

Preventative healthcare for this breed can be achieved through a series of Eye, DNA and a series of Hip tests with the aim to prevent the occurrence of these health issues.