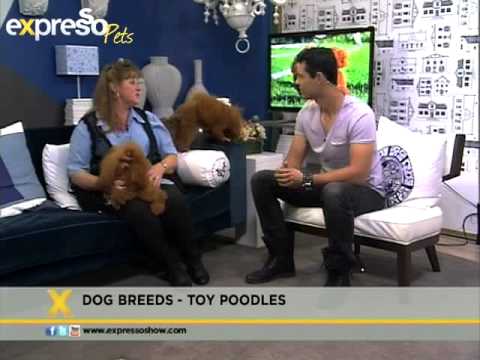 The Toy Poodle is one of the three distinctive size Poodle breeds which are undoubtedly one of the most popular breeds in the world today.  Standing at just 10 inches in height and with a weight of no more than six to nine pounds, this breed has been a seemingly epitomized of a leisurely and luxurious lifestyle.

It is almost impossible to conceive that this breed was originally bred as a water retriever used to fetch waterfowls for hunters by jumping in the water. Today the are seen as exotic show dogs primped up and displayed at the most renown events.

The English name Poodle was derived from a German background of the word pudel which when translated actually means to splash water. In France they are referred to as Caniche derived from the French word chien, canard which translated means duck dog.

Though it may not be observed at first glance, the Toy Poodle’s coat which it is most known for has a specific purpose. Selectively trimmed areas were done to lighten the weight of its coat ensuring it would not become entangled with debris underwater as the lengthy hair beneath the general area served as protecting the vital organs from unfavorably cold water.

Regardless of their small size, Toy Poodles have a playful, delightful, and dignified temperament. Easily trained they are excellent performers at sporting activities including acts of obedience hunting tests, and agility. Bred for their love and adoration, the Toy Poodle is highly affectionate and enjoys the company of it’s family members and will experience loneliness if left alone for extended periods of time.

When deciding to breed your female Toy Poodle it is best to ask around to find a reputable stud. The stud should be inspected and taken to a local veterinarian to determine if there are any physical problems existing which could potentially be passed down to the puppies in the litter. Occasionally the owner of the selected stud will negotiate a specific price for the use of his breed and a time when the mating will take place.

It is then important for you to determine the heat cycle of your Toy Poodle. It has been observed however that the heat cycle of each Toy Poodle will vary as many breeds have been known to cycle for the first time within 4 months of age, some taking as long as 12 months. Regardless of the initial time period the cycle will generally last around three weeks and can be determined by specific signs seen within the female Toy Poodle. Symptoms of the female heat cycle will include the swelling of the vulva with a reddish discharge. She will seem restless at most times with an increase in her frequency of urination.

It is recommended that you make a note of the date when you first see visible signs of her bleeding as this is an indication that your Toy Poodle is entering into her first week of heat cycle. During the first week your Toy Poodle will not mate with any seemingly interested males and will ward off any advances made to her by the stud. It is during the second week commonly known as the period when she is most fertile will your Toy Poodle female be more receptive to the stud.

The owner of the stud should then be notified at this point that your female Toy Poodle is in fact ready for breeding which will most likely occur during the second week of her heat cycle. Both breeds at this point should be placed in a room together and allowed to mate under careful observation to ensure there are no instances where they may become injured during the mating process.

A successful breeding will be observed in your Toy Poodle showing signs of an increase in her appetite as you will need to have an adequate supply of food and water to sustain her increased eating habit. Her stomach in addition will become increasingly enlarged over time having been successfully impregnated.

The normal gestation period for the Toy Poodle breed will last between 58 to 63 days and she should be provided with a safe nesting place for her to deliver her litter comfortably.

The Toy Poodle on average will deliver 2 to 3 puppies in a litter by herself as she is quite self sufficient to give birth without any outside help.

Once the delivery process is complete it is suggested that she be cleaned and placed in her nesting area with the puppies and kept warm.