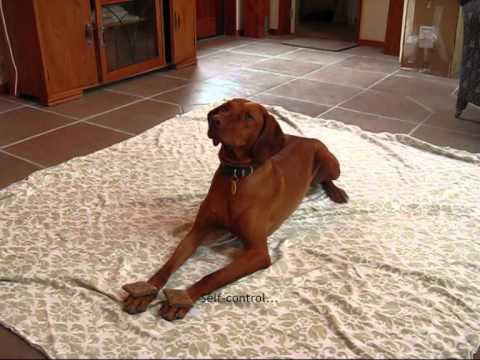 Known as a hunting breed, this medium sized strong body dog is just slightly longer than it’s height accounting for it’s speed and endurance on the field resulting in a light smooth, graceful gait.

Originally bred in Hungry as a pointer and receiver to work closely with the hunter always remaining in close proximity. A characteristic that has remained with the breed to this very day in the dog’s actions as it leans against your leg or as a foot warmer during the cold season.

The Vizsla’s muzzle gradually tapers from the top towards it’s nose and can be seen as the same length or possibly shorter then the skull. The nose of this breed can be seen as being slightly flesh colored in contrast to the color of it’s coat with a strong neck with no notable dewlap.

Vizsla’s are generally seen as having solid rust colors with their smooth coat that lays close to the body. There are some breeds however that have a wooly undercoat slightly longer than normal, without the traditional colors and can be observes as including pale yellow or dark mahogany red. Such varying breeds are not recognized as standard and as a result are generally not accepted when looking for a Vizsla breed.

Grooming the Vizsla is a fairly easy task as a rubber curry brush and a damp cloth is all that is required to brush the coat weekly. The nails should be trimmed once per month to protect your shins from being scratched during the dog’s show of affection while jumping up to greet you.

The Vizsla is a hard working affectionate breed noticeably happier when that have been given a task to accomplish rather than simply lounging around the house. Such a task is best observed within a family with a tradition going on hunting expeditions where the dog can be seen as the perfect hunting companion. The Vizsla can also be a great jogging partner or therapy dog. An hour of exercise daily is all that is required with the Vizsla to ensure the breed remains a happy and loyal friend.

Vizsla’s have been known to get along very well with other dogs as well as cats especially if they have been raised with them as a pup. However they should not be trusted in the company of small birds, rabbits, hamsters or gerbils.

The Vizsla is a quick learning companion extremely obedient and agile with a natural knack for extraordinary scenting skills gives this breed the ability to be a natural hunter which has allowed law enforcement officials today to employ these skills in the areas of drug detection, search and rescue and even as guile dogs. Training the Vizsla is best accomplished through the use of positive reinforcement techniques including praise and rewarding with food and are best trained as puppies with just a few minutes of practice on a daily basis.

Otherwise from the hunting environment Vizsla’s are best suited in the home with an owner who is generally at home and is able to keep the dog company, providing mental stimulation and recreational activity to keep the breed happy as it is highly likely that the dog will become bored and destructive without the right stimulation.

When breeding your Vizsla it is generally recommended that the dogs be at least two to three years old and the male between 22 to 25 inches and the bitches be about 21 to 23 inches at maturity to ensure the puppies achieved will be of a suitable size. Both dogs should be thoroughly tested prior to breeding to ensure there are no existing diseases which could be passed on to the puppies as common medical problems associated with this breed include, canine epilepsy, hip dysplasia, progressive retinal atrophy, and sebaceous adenines. Vizsla bitches will go throughout their first heat cycle within the first year after which the cycle will repeat every six months.

General signs of the female Vizsla in heat will include, hard swelling around the vaginal area with slight bleeding. She will curl her tail to the left or right as she approaches the time for mating urinating frequently to spread her scent for the male.

After successfully mating the Vizsla will generally deliver a litter of around 7-8 pups after which the puppies should be raised indoors and exposed to human contact as early as possible allowing them to socialize which will make training mush easier at a later date.

Vizsla puppies like most medium to large build breeds will reach puberty within 7 to 10 months and will finish growing within 12 months. Similarly to human teenagers, this breed will develop a noticeable change in attitude giving a strong indication of their independence in that they are no longer puppies.