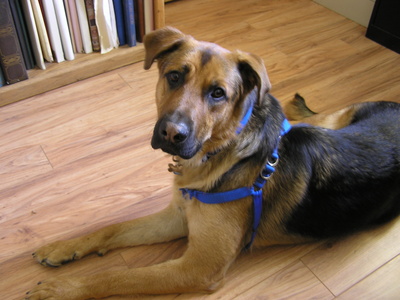 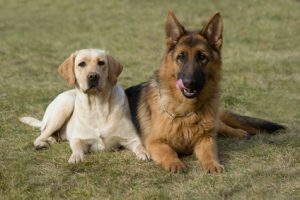 The German Shepherd ancestry of this mix originated in Germany in the late 1800’s and gained it’s recognition by a man by the name of Captain Max Von Stephanitz. The breed was introduced to America for the first time in 1907. They were originally used as herders of animals such as sheep and cattle, hunters of game animals, and guard dogs which are a few of the many skills this breed has today. The German Shepherd Lab Mix inherited these traits. Many police forces and military units train German Shepherds to aid them in rescue and retrieval missions.

German Shepherds are usually two toned in black and tan, but can be a combination of other colors such as black and red, tan and red. Some are even born with a solid coat of red, black, tan, or white. German Shepherds have a double coat. The outer coat does shed year round, while the undercoat provides warmth for this breed in extreme weather conditions. The German Shepherd Lab Mix also has a double coat which requires a lot of maintenance and takes a good amount of time and patience to wash and brush.

The German Shepherd Lab mixes’ Labrador ancestry dates back to the 1900’s. This breed was born from a cross between a retriever and a small water dog in Newfoundland, Canada. In 1878, the Earl of Malmesbury imported this breed and they were first recognized by the English Kennel Club in 1903. Labradors are known for their keen sense of smell and their retrieving skills and were mainly used for hunting.

Today, Labradors are one of America’s favorite breeds. They’re loyal and friendly and make an excellent family dog. Their life expectancy is about 10-13 years. They come in a variety of colors such as yellow, chocolate, black, and white. The Labrador’s coat can come in many styles such as smooth and wavy. Their coats are dense and are excellent for water activity. Labradors require a lot of grooming care as they are mainly outside dogs. They are a strong breed and are excellent swimmers. They love participating in outdoor activities such as swimming, running, and retrieving. Labradors, like German Shepherds are highly intelligent and have the capability of learning and remembering a large number of commands very quickly. This breed has a high energy level and requires a lot of exercise which makes it a great companion dog for someone who enjoys the outdoors. 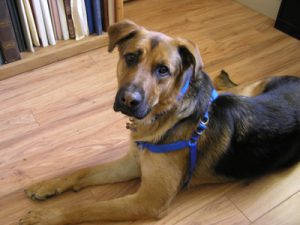 The German Shepherd Lab mix is the perfect combination of two very strong breeds. This breed is not only strong, agile, and intelligent, but also very loving, affectionate, and docile. They tend to be a bit shy when it comes to strangers or meeting another dog for the first time, but they eventually warm up to the idea once they feel comfortable. Training should be approached with a positive attitude as this breed loves to feel accomplished and enjoys a reward for their hard work.

This brilliant breed has a double coat and requires a lot of brushing and washing does take a little extra time than washing a dog with only one coat. Their coat color takes after the Labrador and is usually dark in color; either black or dark brown, but some have a tan underneath or a white chest. The German Shepherd Lab mix is quite vocal and their bark tends to sound more like a German Shepherd than a Labrador. The German Shepherd makes a great family dog and companion and is becoming more popular among breeders and dog lovers.

Is The German Shepherd Lab Mix The Right Breed For You?

If you don’t like the idea of owning a German Shepherd Lab mix feel free to read about other breeds in the Dog Breeds section above!