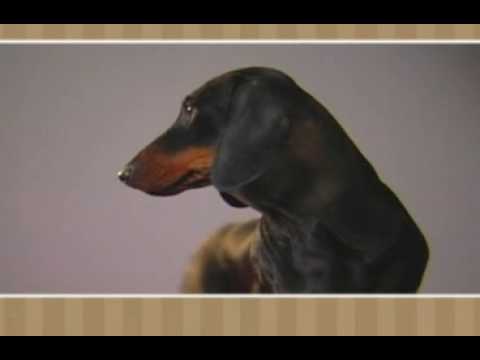 The Dachshund breed although the target of humorous critic remarks such as “half a dog high and half a dog long,” is tough enough to tackle any badger. It should be noted that in truth this dog was bred for the purpose of taking on the badger, which is how its name was conceived from Dachs meaning badger and hund meaning dog.

The Dachshund are generally seen to exist in three specific varieties: shorthaired smooth, longhaired and wire-haired. This breed within the United States are seen as a miniature breed of just about 16 to 32 pounds in weight. In instances where this breed is seen to have a lesser weight of about 11 pounds, then it is referred to as a tweenie.

Regardless of their size Dachshund are a wonderful breed and a delight within any family which is one of the reasons why they have been ranked as one of the more popular dogs ever since 1950. Due to their unmistakably adorable appearance and energetic disposition this breed has been  affectionately referred to as wiener dog, sausage, hot dog, Dashie, and Doxie among a few other nicknames.

Dachshund have been a long time subject of cartoonists and toy makers due to their rather amusing appearance as they proudly strut their long muscular sausage body on their short legs. Though seemingly amusing; the Dachshund breed was bred for a practical purpose as their short legs served the sole purpose to dig and maneuver within tunnels to corner and effectively fight badgers and other animals when hunting.

Seen as having a playful nature within the home, the Dachshund breed likes to remain close to their owners and may at times become jealous if not given adequate attention. Intelligent lively and clever, this breed enjoys chasing birds, small animals and toys around the house and is never seen as shy in the company of strangers. However they should be properly trained and socialized as they have a natural tendency to become snappy.

The Dachshund has a distinctively loud and deep bark despite their size which at times can be an annoying attribute to neighbors or amusing to guests. This is due to the their massive lung capacity and barrel like chest.

Americans are extremely fond to the smooth Dachshund breed. With their short shiny coats they require little grooming. The do however need a sweater during the winter seasons or if they are subjected to cold climates on a regular basis. The Smooth Dachshund breed is commonly seen as having the colors of red, black, cream, and tan with instances of patterns in their coats including a mottled coat pattern, sable, piebald, and brindle.

Wire-haired like Smooth Dachshunds have a distinctive mischievous behavior. This breed defined by their short, thick rough, wiry coats and busy eyebrows does not require a sweater during the winter seasons. The do require constant grooming and brushed regularly to prevent mats from forming within it’s coat which can be seen as having the same colors as the Smooth Dachshund.

The Dachshund breed is an excellent choice for apartment owners without the facility of a backyard because of their small size. They can be seen as quite active in indoor surroundings and love to take walks. Extreme care must be exercised when handling this breed as they are prone to slipped discs due to their long backs which often can result in paralysis.

As a more popular breed, the Dachshund have been owned by breeders out of the love for money rather than the love and care for the breed as a member of the family.

When breeding the Dachshund it is generally recommended that you should have an understanding of the specific personality and physical attributes that are considered desirable with respect to the Dachshund breed. Most owners prior to having purchased their Dachshund visited dog shows and spoke with breeders and handlers in order to learn more about the breed including common challenges.

Then comes the decision of whether you would like to purchase both a male and female or rather just purchase a female in which you would breed her for a male stud owned by another breeder. Have a knowledgeable veterinarian on hand who is readily available to offer advice and care for her litter. Ensure your Dachshund is healthy and of suitable breeding age.

Like most breeds, the Dachshund will go into heat and receptive to breeding every 6 months or twice per year. Your local veterinarian will advise you to wait until she is in her second heat cycle which will generally occur when she is about a year old. Most breeders will advise you not to breed your Dachshund every time she has her heat cycle, but rather the breeding should be done with care and consideration to the health rather then every time she has her heat cycle. Your local veterinarian should be consulted to test both the male and female to endure they do not have any diseases that are likely to be passed  on to the puppies.

The female should be separated from the male while she is in heat until you have decided to mate her. Upon successful mating ensure the female remains in good health through nursing and whelping ensuring the puppies are examined periodically and the necessary vaccinations administered.